Designed for big peaks in the Andes, Canadian Rockies, and Alaskan Range, the Scarpa Phantom 6000 Men's Mountaineering Boot is an alpine workhorse. Being a few hundred grams lighter than the Phantom 8000, this boot caters to the light-and-fast alpinist, but maintains the same sturdy materials for hard-wearing reliability in demanding alpine environs. Schoeller, KEVLAR, and Cordura make up the outer fabric of this boot to repel shrapnel from rock, ice, and snow, while the waterproof OutDry membrane ensures moisture doesn't seep through. The twisting Flexseal zip delivers a waterproof closure to the outer gaiter, and the inner boot is secured by a quick-lace system that utilizes a super durable Dyneema cord for a snug and progressive fit. Primaloft Micropile insulation, aluminum, and EVA insulate against cold temps, and the stiff carbon fiber insole gets an extra bit of EVA cushioning for enhanced comfort while hiking up snow ridges. The Phantom 6000 is compatible with step-in crampons and will climb everything from steep ice to exposed sections of rock with authority.

overall good quality and nice shoes.
I get extra discount from here: coupon-code.info

I was going on an early season Mt. Rainier trip and was told I’d probably need double boots due to the cold weather conditions and I didn’t want to rent boots. Although I already owned LS Nepal Evo Cubes, I started my quest to find a comfortable double boot. I tried the LS G2, LS Baruntse, Mammut Nordwand 2.1, Arc'teryx Acrux, North Face Verto 6K and the Scarpa’s. I have high arched feet and a wide forefoot so finding good fitting boots can be challenging. The Scarpa 6000 fit like a glove and with the Superfeet insert it didn’t feel that different than my Nepal’s.

I had read about the zipper issues from other reviewers and while Scarpa doesn’t provide zipper lubricant, I put some TIZIP lube and it seems to ease the tension of the zipper and allow for smoother operation.

My first couple of local hikes in the White Mountains of NH, I developed blisters after the first couple of hours due to the amount heat produced when the ambient temp was 30+ degrees. It was the wrong boot given the warm weather conditions so I couldn’t fault the boot for the blisters.

Overall, this is a quality boot. I liked the construction of the inner boot and my feet never got cold, sore or tired when carrying ~50lbs on Rainier. In my training hikes, I would always tighten the laces in the boots to have a snug fit to feel like a regular boot. However, the guides on the Rainier hike said to leave the laces wide open and not tighten them at all. I was skeptical that this would increase the slippage within the boot, cause blisters but it worked perfectly. The entire hike on Rainier, I just slipped the inner boot in, moved the laces to the side away from the zipper, secured the ankle strap and zipped up the boot. Worked like a charm and I even stopped wearing preventive moleskin on my heel for blisters.

It is all about fit and comfort. The Mammut was a close second and although they are a cheaper boot compared to the Scarpa 6000, I choose the Scarpa’s because of the construction and feel of the inner boot and the reputation of the company. I don't know if they had a sponsor deal, but all of our Rainier guides were wearing Scarpa boots.

The wraparound zipper is pretty odd and difficult to use. The boots seem pretty decent, but not worth the price point. I ended up keeping the Mammut Nordwands instead.

Scarpa does not stand behind it's produc

I do want to warn people not to buy the Scarpa boots. My Scarpa Phantom 6000's worked out fine for less than a year. When I called and e-mailed Scarpa repeatedly about issues with the zippers I was ignored and finally told they couldn't fix the zipper. What kind of product that runs close to $1k can't have the zippers fixed? Horrible customer service.

Disclaimer: My model of the Scarpa 6000's has the earlier straight up zipper. I've been trying to get them to fix it for over a year!

DO NOT buy this boot. I received mine today, removed them from the box, pulled on the left one, zipper a bit tight but all good. Pulled on the right one and the zipper immediately failed, first try. Also, if you are from CANADA, do not order anything from Backcountry.com. These boots are available in Canada but nobody had my size, so I was charged $311.00 CDN duty. If Backcountry would register in Canada this duty couldâve been avoided. My wfe mail ordered a pair of La Sportiva boots direct from La Sportiva in Boulder, no duty, so it can be done. Also, when I called in to set up the return I was told they could not issue me a FEDEX shipping tag, so Iâll have to pay return shipping, very doubtful if Backcountry will cover that tab. All in all it will cost me a ton of money to receive and return defective merchandise. Canadians, I advise you to look elsewhere for mail order, lots of options that will provide better service. 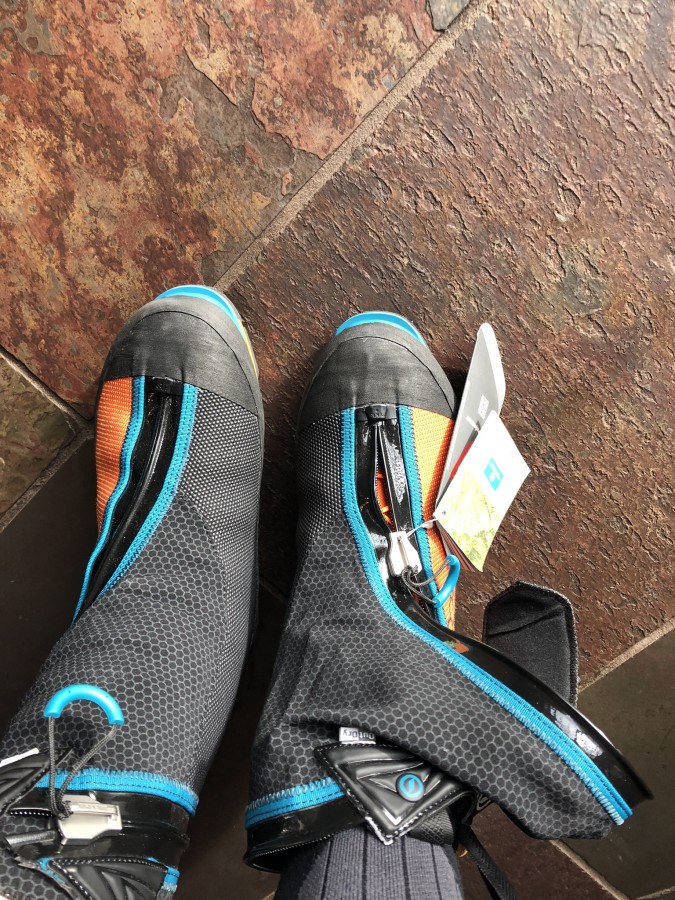 Not perfect, but got the job done

Overall, the Phantom 6000's served me well on several ~6000 m peaks in Ecuador. Their warmth was just right for that environment, and I found them to be relatively comfortable and light-weight.

The two main contenders for the job were the Scarpa Phantom 6000 and the La Sportiva G2 SM. Ultimately the deciding factor in favor of the Phantoms was fit, although neither fit me quite as well as I would have hoped. The design and construction of the Phantoms vs the G2's was also a mixed bag, each with their respective strengths and weaknesses. I'll elaborate on this below.

For reference, in the La Sportiva Nepal EVO's I'm a 42.5. So I tried the same size in the G2's, and it was too big all around. The G2's in 42.0 seemed to be the right size, but still just weren't shaped right for me. There were pressure spots in weird places on the sides, and what seemed like excessive volume in the instep area (would better fit someone with a high instep), and they had significant heel lift that I couldn't get rid of no matter how much I snugged them up or what socks or insoles I tried.

As for the Phantoms, they're only available in whole sizes, which is unfortunate because the Phantoms in 42.5 would have probably been perfect for me. Size 43 was way too big. Size 42 was workable (that's what I ended up with), although it was marginally too small in the toe box. Interestingly, the G2's in a 42 had plenty of toe room. Still, the Phantoms in 42 were the best compromise on fit, so I went with it.

Took the Phantoms for a first spin on some mixed terrain, and was only able to go a couple of miles before developing some horrendous blisters on the rear/insides of my heels. It took several rounds of trial and error to zero in on the right sock combination, plus moleskin, to solve this issue. But after that, I had no more problems with blisters, and they fit reasonably well.

And then on the outer boot, the closure system on the Phantoms is simple and low tech. A lace on the bottom, and a velcro power strap up top. I found this to be adequate, although I did need to crank down hard on both in order to lock the heel in. The power straps felt a little thin and flimsy for the amount of tension I was putting on them, to where I was worried I might actually tear them, but everything held up.

In comparison, the Boa closure on G2's is high tech, and has the advantage of letting you ratchet up the tension precisely on the upper and lower parts of the boot. But I found that the whole Boa mechanism felt pretty fragile too, and I was afraid to crank down on it as much as I would have liked. Even just pulling those flimsy plastic knobs to release it felt like I could accidentally pull just a little bit too hard and probably break it. And having to do a field repair on that Boa, if it broke at an inconvenient time, would be more troublesome than dealing with a simple broken lace on the Phantoms.

And then the gaiters. The spiral zip on the Phantoms is nice in that it doesn't fight the natural flex at the front of the boot. But the zipper itself felt a little delicate. And others have reported zipper failures, so I was very careful with it, and thankfully didn't experience any problems. In comparison, the gaiter on the G2 has a velcro closure straight up the front, which is much bulkier, creaks as the boot flexes with every step, and is probably less effective against water intrusion, but is otherwise pretty bulletproof.

Due to timing issues I only had a few smaller climbs to try these boots before a 20,000' summit in Nepal. Sometime on our glacier travel the zipper broke open on these brand new boots! Unfortunately my feet run large so it was suggested I try Scarpa's. From talking to the Sherpa's and other experienced climbers on the mountain this is not the greatest boot - you'd expect more for something nearing $1000. 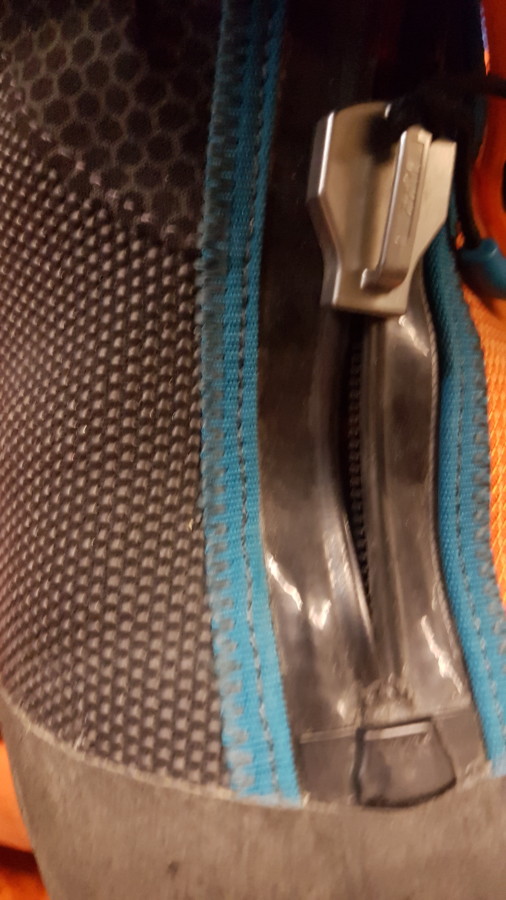 Im interested in what they did recomend? If you check this again please enlighten us.

Imagine training for a big mountain trip for months, and spending months’ worth of salary for plane tickets, gear, permits, outfitters, etc...and then having your expensive (non-returnable!) high-altitude mountaineering boots fail on you the second time you put them on. Yes, this happened to me on Aconcagua at Camp 1, at 16,800’, the zipper broke. Had to jury-rig a fix. NOT something you expect from expensive boots, but heard from a guide that they'd seen it before with these exact boots. So avoid these.

I can't believe Backcountrys not refunding you or at least exchanging. That's crappy.

Wait... Camp 1 at 16,800 ft on Aconcagua was only the second time you put these on? That doesn't seem very smart. It's terrible that they broke, but you should have really spent those months of training actually wearing the boots you'd be climbing in.

I'm curious about which part of the zipper broke. Can you post a picture?

It seems strange that Backcountry won't give a refund or exchange. They're usually awesome with they're return policy!