454 out of 5 stars
4Reviews
30% Off
$90.96 Original price:$129.95
Changing the size selection, or changing the selected color after selecting a size, may change the associated price
Item #MER00H2

If you love your mocs the rest of the year, then take that level of comfort into winter with the Merrell Men’s Coldpack Ice+ Moc Waterproof. With Vibram Arctic Grip giving you traction on slippery sidewalks and M Select Dry preventing slush from seeping through the shoe, you can confidently stroll through whatever winter throws at you. Conductor fleece wraps your feet in cozy warmth to keep the feeling in your toes. A Merrell air cushion and EVA footbed provide stability and absorb impact to keep you comfortable for long days on your feet.

My first impression was I liked the look, the design was interesting enough for me to purchase a pair. When it arrived it felt very light and I didn't think it would hold up. I tried it on flelt very tight/snug on my feet. Guess I will only wear this to work.... However after 5 months of use, this is my go to pair of shoes. It's like a pair of jeans. The shoe is very comfort fitting on my feet and I am loving the style. Sure it easily gets the superficial nicks & blemishes, but I feel it just adds to the character of the shoes. Heck I still get compliments on the shoes, and I don't believe it's my looks have anything to do with it. XD 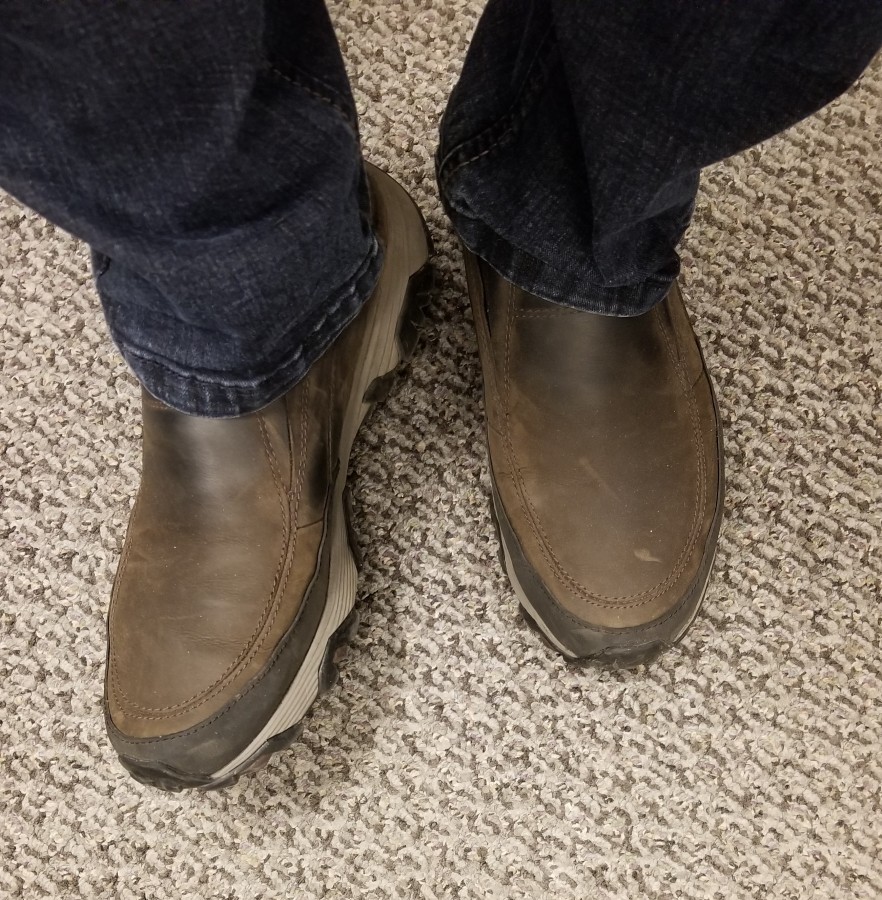 Does what it says, not much else

Look, if Iâm gonna drop $130 on a pair of boots the least you can do is send me a durable product. If they start falling apart midway through month 4, Iâm gonna be more than slightly skeptical of the company in question. 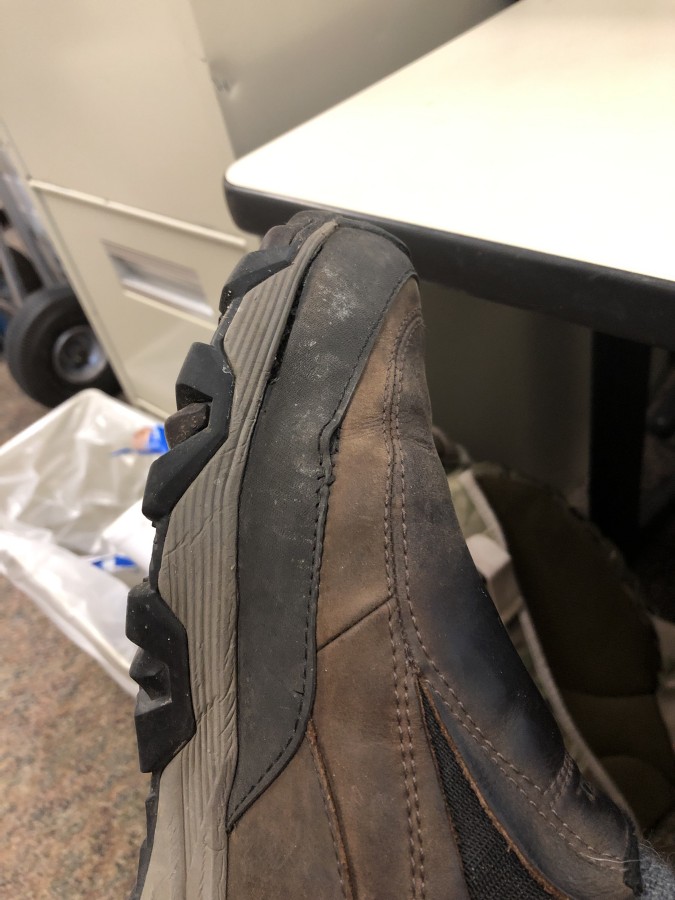 BMI of >36 could be applying undue stress on your footwear!

Shoes don't hold up to use

This is the second pair I've purchased over the past few years. I wore the tread out in the first pair and liked them so much I bought a second pair as replacements. I've had these for a year or so and now the sides are blowing out! The shoes are not tight on my feet, but the continued flexing around the balls of my feet cause them to blow out, ruining their waterproof-ness. I tried using some RTV to seal them up, but it won't stick to the silicone rubber. This problem has been noted by others on other company's websites, so it's not just me. Were it not for this problem, I'd be wearing them all the time and would wear them until they were again worn out. I just bought a pair of Keens to replace these. 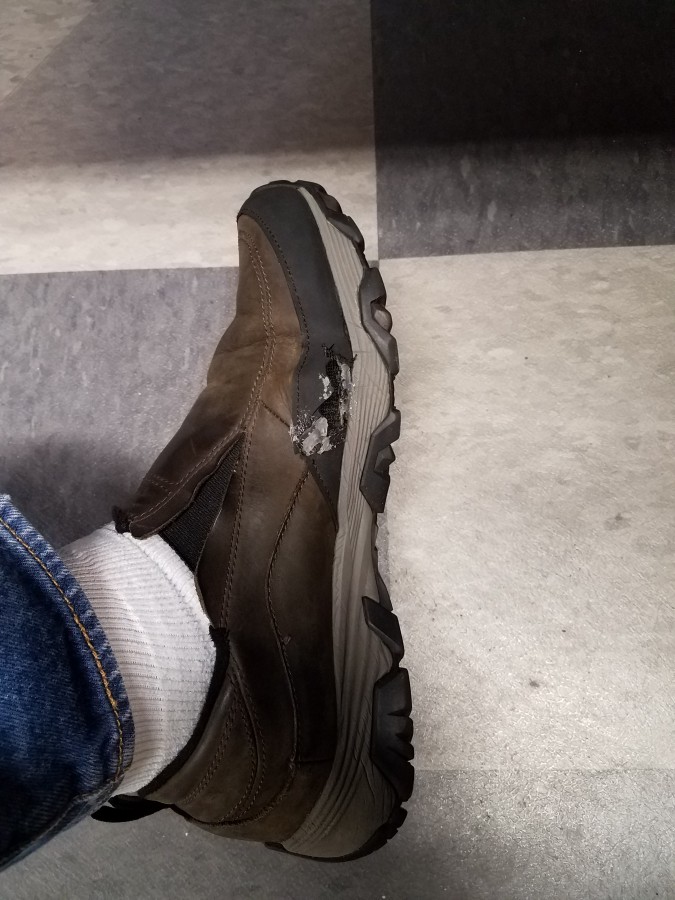 The shoes are very comfortable and keep feet dry. The grip on the soles has been very nice on wet surfaces as well.

Merrell Sizing Notes:
Merrell boots are designed to fit like your street shoes.
When ordering Merrell boots, shoes, or sandals, you should reference your normal shoe size.
What to Expect:
A snug fit in the heel: In a stride, your foot bends at the ball, and the heel tries to pull away from the boot.
Because of Merrell's precise fit, the upper follows the heel. This prevents the slipping and sliding that eventually causes blisters.
Snug over the instep: Besides preventing the toes from sliding forward when you go down hill, a precise instep fit gives you internal control.
When you're standing on sloping rocks, the boot sole doesn't sideslip underneath you.
Toe Room: Merrell gives plenty of room to the toes. This room, combined with a sturdy toe box, protects the toes from getting bashed by rocks.
Choosing Socks:
For Hiking Boots choose heavyweight, thick, dense socks, with or without a liner sock.
For Multi-Sport choose light-or medium-weight dense socks.
Before You Take Your Merrells to the Trail:
1) Try your new boots on over the correct sock combination without lacing.
Stand and push your toes forward so they touch the front of the boot.
You should be able to slip one finger into the space behind your heel.
If there isn't enough room, the boot is probably too small and you should try the next half-size larger.
For boots to be used while carrying a moderate-to-heavy pack, a full finger space is recommended.
2) Tap your heel back in the heel cup and lace the boot.
The boot should feel snug across the ball, around the instep, and in the heel.
The arch should be comfortably supported and the toes should be free to wiggle and curl.
3) To check the fit in the heel, walk up an incline. The heel should lift a maximum of 1/2 inch (1.75cm).
4) The toes should not jam into the front of the boot.
Checkthis by walking down an incline or tap your toe lightly into the floor or against the wall. If the boot fits correctly, the toes should gently touch the end of the boot.