When a weekend in the great outdoors is on your list, don’t let a heavy pack hold you back. The Gregory Paragon 58 Backpack gives you room to bring along the gear you want without making sacrifices, while simultaneously shaving weight to keep you light on your feet. With a minimalist mindset, this pack lets you cover long distances on overnight trips.

The Aerolon suspension system wraps hollowed out aluminum stays in a matrix ventilation system to keep the pack surprisingly supportive, given its light weight. The Aerolon system also features 3D-molded EVA at the shoulder straps and waist belt for cushy comfort.

Whether you use the zippered bottom compartment or external straps, the Paragon makes sure your sleeping bag isn't just crammed along for the ride, but secured in a space-efficient manner. The hydration sleeve not only keeps your water close by, but also doubles as a removable Sidekick daypack for quick day trips, summit hikes, or supply runs into town on a thru-hike. There's also a Gription lumbar pad for extra support, and the entire system adjusts vertically and horizontally for a customized fit.

I was given the Gregory Paragon 58L by Backcountry to test. The following review is solely my personal opinion and not influenced by either Backcountry or Gregory.

Overall I really liked the pack. I found it to be well thought out, well made, comfortable, lightweight, and durable (so far). My only complaint is one of capacity. For a backpacking backpack, I would prefer something with around 70 liters of capacity. If, however, you are looking for a slightly smaller capacity pack, I would strongly suggest you look at this excellent offering from Gregory.

My test consisted of a month long trip through Greece and Scotland, so having a slightly smaller capacity pack was perfect. Although it measured a few centimeters longer that the

I recently got to test out the Gregory Paragon 68 pack as a ranger for the Dyrt and it was really an incredible upgrade from my previous equipment. One of the major advantages to this pack is the weight. It is so much nicer to cut off those extra lbs when climbing the hills in the woods of Alabama. I felt like I had the ability to be more flexible with the gear I brought since the pack weight was so much less. Additionally, the pack is super comfortable and even after covering 7 miles in 2.5 hours my back was not sore or tired at all. The straps sit really well on my hips and are well padded. The pack also had very well designed pockets for all your gear. The hip belt pocket had a large enough space to hold my iPhone which was a big plus and the water bottle holder on the side has both a top and a side access. Another cool feature of the pack is that it has a summit pack built in that doubles as a water reservoir holder to keep everything dry. Overall I would highly recommend checking out this pack if you are planning to do backpacking where weight will be a factor.

Okay, I'll just throw this right out there from the beginning...I am biased... but I'm also demanding, critical and honest. So if a product lives up to its claims and survives my demands...I'm a believer!

I previously purchased and enjoy the Gregory Baltoro 85 and Gregory Baltoro 75 GZ (Goal Zero), so when the invitation was extended to test and evaluate Gregory's New Paragon 58, I jumped at it. As a review ranger for TheDyrt, on occasion I am honored with these opportunities.

I have used various big name brands of backpacks over the past 30+ years and settled in on Gregorypacks.com.

For those new to researching for a new pack, go back a couple years to 2015 and note Gregory's Baltoro 85 was presented both Backpacker Magazine's Editor Choice Gold Award and Outside Magazine's Gear of the Year Award. Which caught my attention.

Sizing: All three of these Gregory packs are men's medium. I am 6/180, average build..

At first glance, there were identifiable differences between my Gregory Baltoro "heavy haulers" and the new Paragon 58 other than volume. I deviated from my usual color choice of black (that hides stains well) and chose Omega Blue...which I like, but hope it keeps that clean look. Just hoisting the Paragon 58 reveals immediately the weight difference. At 3.9 lbs its not an ultra-light, but it carries even lighter by perception.

The Paragon 58 is classified as a weekend tripper. I was able to pack enough for 4-5 days, tipping the scales at 40 lbs. I immediately noticed a difference from the Aerolon Suspension and Matrix Ventilation System with increased breathability and airflow. I was hiking in consistent 90 degree sunshine, and while I was drenched with sweat, I could feel the air circulating on my back. In turn, providing me with increased comfort. When doffing the Paragon 58, it didn't feel as though I was peeling it off my sweat-drenched back.

As for overall comfort, the Paragon 58 adjusted perfectly for my torso, maintaining a snug, stable fit. I experienced no swaying, shifting or imbalance. The Hipbelt sat firmly on my Iliac crest and stayed there, due in equal part to Gregory's design and the Gription material in the lumbar.

The removable SideKick reservoir holder inside the pack, easily detaches and transforms into an ultralite day/summit pack with mesh shoulder straps...should you desire to leave your Paragon 58 at basecamp while you enjoy forays. The SideKick has room alongside your hydration reservoir inside the sleeve, but also has a small external zippered pocket and dual lashing points down the exterior of the entire pack.

The new Paragon 58 also sports a convenient SideWinder waterbottle pocket on the outside right, reachable as you hike. I had no difficulty retrieving and reinserting a water bottle into this SideWinder sleeve. Though thinner diameter bottles may slide out as you don and doff the pack. With a Camelbak 32 oz Eddy, I had to spin the loop on the cap downward to avoid arm swing.

The included rain cover is stowed neatly in its own "labeled" pocket. In fact, most items are labeled on this pack.

One of the biggest grumblings I had/have with the Baltoro packs are the smallish Hipbelt pockets. I can't fit my iphone 7 in them (when housed in waterproof cases). The new Paragon 58 remedied that with two cavernous Hipbelt pockets. One zippered mesh pocket (L) and one zippered nylon pocket (R). The only bummer is, the right concealed pocket is not a WeatherShield pouch like the Baltoros.

I love the pack and look forward to using it on shorter hikes...however, I do wish I would've chose the larger 68...which may have supplanted a Baltoro from my stable. My greatest concern, and the jury is still out on this, the compression and adjustment straps for the shoulder harness have considerably thiner web straps. Though nothing negative has occured as of date...smaller webbing means smaller sewing surface, which increases the possibility of faster failure. That thought is purely personal conjecture at this point. 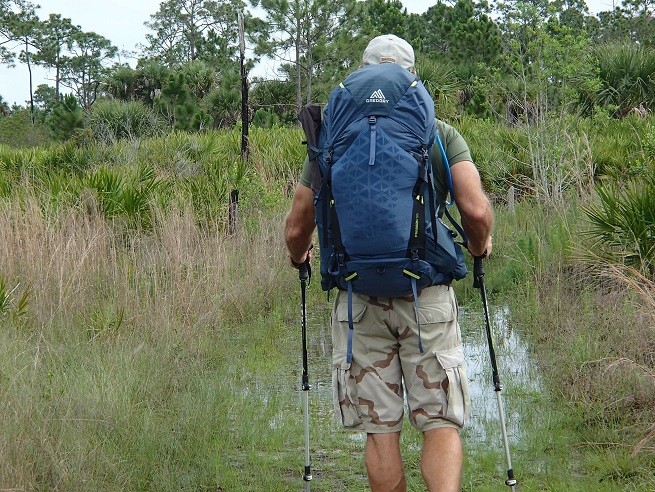 I really liked the idea behind this pack, especially coming from a trusted brand like Gregory, but when I loaded it with sand-bags to get to ~30 lbs, there was nothing special about it. The load swayed heavily under a weak suspension, and the hip belt fit very small. UL backpackers--especially with a bear vault and 4-5 days of food--still spend the first leg of their trip above 30 lbs, so I was out. I had the same verdict with the Osprey Exos, but at least the Exos had better ventilation on the back panel. Finally, I'm pretty sure it's not possible to fit a bear canister (namely a bv500) in this pack. I'm going to give the Mariposa a try next.

Lightweight but not Ultra-lightweight

I have an older Gregory Teton 60 (5.8 lbs) I use for backpacking and I have been trying to shed some weight on my gear for backpacking trips. I have looked at many different manufacturers of packs including the cottage companies and their ultralight offerings but I wasn't ready to commit to the ultralight mindset. I have adopted certain ultralight principles though and they have helped me to lower my pack weight. I'm not a thru-hiker so I didn't need an ultralight designed pack but I wanted a lighter weight pack than the one I currently own. I know there are many fans of the Osprey Exos pack but I have had problems with the way Osprey packs fit me. I came across the Paragon 58 and liked that it was in between ultralight and traditional. I ordered it and it arrived yesterday. I have to say that it is a very well thought out and designed pack. I like the integrated day pack/water sleeve idea. I like that I can replace the standard lid with the sleeping bag compartment flap if I desire to trim some weight. I can remove the rain cover to shave more weight. I know the ultralight mindset steers away from pack covers but I have had good luck with them. The cover easily stows into it's own pocket. If I'm not expecting rain on a trip, well now I have an extra pocket to store things. The large stretch outer pocket is a very nice addition and in-line with the ultralight pack designs. I have always liked the way Gregory packs fit me and the Paragon with its range of adjustment, fits quite nicely. I ordered the M/L and dialed in the fit easily because the torso length is adjustable up to 4 inches. The hip belt is adjustable also. I put some gear in the pack; sleeping bag, tent, pad, alcohol cookset, a few clothes and it hardly noticed it. I think this is a well designed pack from a great company.