Can't wait? Consider one of the other Men's Road Bike Shoes we have in stock.

When it comes to fit that feels virtually molded to a cyclist's body, Assos definitely knows the score. For cycling shoes with carbon soles that can literally be molded to a cyclist's feet, Lake pretty much wrote the book. Combine the two, and you have what may be the most luxurious cycling shoes we've ever had the misfortune of testing and then having to give back: the Assos CyclingSlipper Shoes.

Though the power-to-the-pedals fit of the CFC race last is important, it's ultimately useless if the sole yields to input like nylon. Lake's expertise comes into play here, with the CyclingSlippers featuring the same carbon sole as Lake's top-end CX402 shoes. Like the CX402, the CyclingSlippers' soles are also moldable, for a crystal-slipper fit that wasn't initially manufactured for your foot, but that definitely fits it like a glove. Or a slipper. Or a CyclingSlipper.

The CyclingSlippers' Kangaroo leather uppers are soft and infinitely adaptable, conforming over the course of a short break-in period to the cyclist's foot. After they're imprinted with a given user's pedi-DNA, the uppers are almost as customized as the soles. The lining is both breathable and antimicrobial, and the heel and tongue liner demonstrates the Assos touch by actually regulating foot temperature. The shoes are finished with the ubiquitous-for-a-reason Boa wire buckles, which effect a quick fit before the ride and a low profile throughout it.

Shoes look beautiful and are super comfortable. They were my favorite, until... After only a few hundred miles of use, they started making a terrible clicking noise an each an every pedal stroke. I was able to determine that the problem is due to weakening of glue bond between carbon sole and the overlying foam layer that sits above it inside the shoe (located under to insole insert). I have initiated contact with Warranty department at Competitive Cyclist, who referred me to Assos customer service. I will post an update to advise on how they deal with this. Attached video required "sound on" to appreciate clicking noise.

I purchased these because my Sidi Shots were slightly too snug in the forefoot, resulting in some nerve agitation. I had been racing and training in the Sidis for about 1 season @ 10+ hrs/week and finally decided to see what other options were available. I tried the Lake CX402 but my foot is low-volume enough that the strap across the forefoot was already bottomed out while brand new. I figured that one the shoes had a chance to break in, they'd be way too loose. The Assos version was the answer. No strap across the forefoot like the CX402, and they share the same sole. I was happy to discover plenty of room in the forefoot, and the lining below the insole has a padding to it that keeps my forefoot happy. The quality of materials is excellent, and I highly recommend these to anyone in the market for comfortable shoes. Yes, there are cheaper options out there but if you're looking for premium quality this is it. These fit great out of the box, so I haven't needed to bake and shape them as of yet.

As good as it gets

I first saw these at a granfondo in the Assos truck. I tried them on, and really liked that the carbon sole extended around the heel, which felt very stable and good for power transfer. Assos actually offered a pretty good deal on them, which I subsequently wished I had taken. Fast forward several weeks, during which I dealt with some serious delay on a pair of Vittoria shoes I had already bought at a huge discount from Europe. A CC rep told me that the Lake CX402 shoe is virtually the same as the Slipper at a lower price so I bought the Lakes. They were definitely not the same shoe - felt and fit much bigger and bulkier than the Assos, and the quality was not of a $500 shoe - so I returned them, and decided to just get the Assos.

The shoes have a slightly bulky look to them from the top compared to Sidis for example, but look quite "slim" from the side. The carbon sole wrapping around the heel makes the shoe very profiled from the back.

The shoes are probably best for narrow to medium width feet. The toe box is quite generous, but the midfoot, and especially the backfoot, are rather narrow. That part of the sole is moldable, but I'm not sure whether it would widen enough to accommodate very wide feet. My pair fit me perfectly right out of the box so I have not messed with "cooking" them in the oven.

The shoes are very stiff, which is great for power transfer, but can make the shoe a bit uncomfortable when unclipping at a red light and putting your body weight on it since the sides are made of carbon. I believe some of the internet reviews I have seen complaining about the shoe being uncomfortable have something to do with the fact that the sole wraps around half of the foot. I personally certainly feel the shoes are supremely comfortable.

Cons: the leather around the ankles had yellowed for some reason. It's a pure cosmetic gripe, not functional, but it certainly warrants criticism for a $500 shoe.

Verdict: Top of the line shoe that's as good as it gets in terms if looks, functionality, and technology. If you can afford it, you won't regret it. 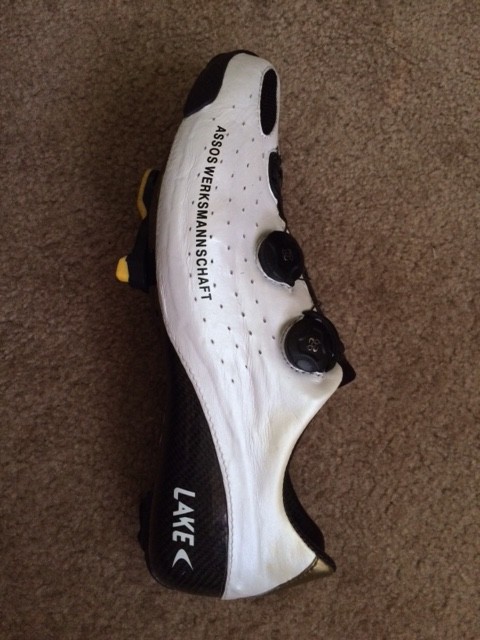 I tried to edit my review and site deleted most of the review when I reposted it. CC, what's going on with your site?

Best cycling shoe I've ever had. Easy to get on and and get off. A really comfortable shoe, from the first time I put them on. Can't say enough good things about them. Just perfect!