Can't wait? Consider one of the other Ski Poles we have in stock.

They can't always be powder days.

A good ski partner can be hard to come by; depending on conditions, you may find yourself skiing crud, mank, or ice all by your lonesome. Don't feel too alone though, because the Arva Tibet Ski Poles share your dedication to excellence in sport and will be by your side when conditions turn sub-par with a bombproof aluminum shaft, grippy grip, and included powder baskets.

Once you crank these things down into position they don't move unlike my other pair that slip because you cant tighten them enough. stood up to me pushing my weight up the mountain on skis as well as bashing hop turns on the way down. Tough to loosen them up but small price to pay for them not giving out under a lot of pressure. 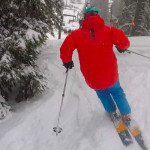 While skiing for the first time with these poles, half of the pole pulled out and disappeared into the snow, I didn't notice until the end of my run. Regardless of me fully tightening everything, they still will collapse or telescope out by themselves. Backcountry won't honor any return or warranty (I owned the poles for 24 hours) and Arva has been silent. Now I'm stuck with having to buy an entirely new set of poles and throwing away the worthless remnants I have of these. Get a real locking set. Don't waste your time.

My exact experience. What a waste of time and money

Very finicky adjustment mechanism that is easy to over-tighten and then spend 10 minutes cursing while trying to unscrew at the top of the hill. However, if left even slightly under-tightened they will come right apart. Had to go digging for sections of pole two times now.

Perfectly adequate for the price, but don't waste the money if you can spend a little more on something nicer.

So, these poles have been a huge bummer. They consistently loosened up while using, then of course as I am annoyingly constantly tightening them up...boom...they are stripped. I took them into a ski shop to see if I could fix this issue somehow. They just looked at me and said, "Oh yeah...these suck". So the next day I switch to downhill from touring and half of one falls off when on the lift. In the powder far below, nowhere to be found. Skiing down with only 1 1/2 poles was a bit strange. I've spoken to a lot of people about these since and apparently most of the screw ones do this after using for a few times.

I bought these poles as I'm just getting into the AT touring scene and of course if you want to look cool, you have to have adjustable poles. Anyways, they're inexpensive which is cool; they lock down tight and stay locked. I haven't had any problems slipping or anything like that. I really loved the interchangeable baskets.
However, I took them out skiing while I had the powder baskets on at the resort and first run I lost the basket.
Luckily I found it again... and then I lost it again... and found it again. Then I threw them in the car. Maybe it was my fault for using powder baskets when I wasn't skiing powder but after I lost the one basket and found it, I tried to screw it back on and found that the threads had been stripped and the basket wouldn't screw down tight and would just pop off the threads.. a little disappointing, but partly my fault. I will probably glue the baskets down permanently now. 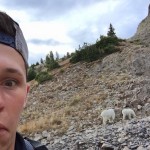